Why the Census Matters to Butte County

Every decade since 1790, the United States of America has counted everyone living within it's boarders, and this is the first year it can be done online. April 1st marked the official start to this year's Census and it's incredibly important we each do our civic duty and participate. Plus it is super easy!

You may be wondering how someone taking the census in our part of Northern California matters to the populous of the entire country, however, you should know that your participation effects everything from local schools to who represents you in Washington, DC.

We are proud to be Census Counts partners and help in promoting a successful census that allocates $800 billion dollars in federal funding for social programs and infrastructure.

The data taken in the Census directly effects those of us in Butte County.

“The Census is critical to so many activities around us including schools, roads, hospitals, local government and programs like ours and so many others that are impacted by the results of the Census. We encourage everyone to make it a positive impact for the sake of our community and our families. Make yourself count," said CEO Thomas Tenorio.

By participating in the Census, you are ensuring that community agencies, like the Butte CAA, will have the adequate resources to serve those in need for the next decade. By being counted you help support programs like:

You are also letting your federal government know how many representatives to delegate and ensure your voice is heard when it comes time to vote.

How to Be Counted

This year is projected to be the largest Census in US history! Make sure you don't miss out. (It is also the law that you participate.) Don't worry, your information is protected and will only be used for the census' purposes and cannot be used outside of it.

If you haven't participated by May, you may be visited by a Census worker who will come to your door to count those in your household.

Thank you in advance for participating in the Census. It means a lot to the country, but more so to us and the people we serve. 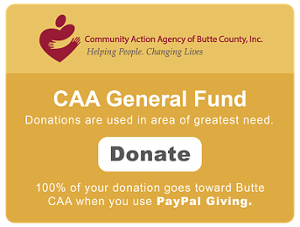